Robert Juliat brought its trademark quality to a wealth of new product releases at Prolight + Sound, Frankfurt.
Robert Juliat profile, Fresnel and followspot fixtures have been synonymous with top quality lighting equipment for over 100 years, yet always maintained their relevance in the current market. This year was no exception with the introduction of Sully 4C, a new variation - a colourful classic LED zoom profile and Fresnel spots with 4-colour mixing - based on the success of the Sully white LED family launched in 2020.

Sully 4C
The Sully 4C Series is an affordable, versatile product range with no compromise on build quality and overall performance. It places a new, factory-calibrated 4-colour LED source (Red, Green, Blue, Lime) at the centre of a full package of lighting tools for an adaptable solution that delivers even coverage in every model type. The range includes a removeable lamp compartment (T650SX 4C) as a quick and easy solution to upgrade RJ 600SX tungsten profiles to coloured LED sources; a Profile series (650SX 4C) that offers the same zoom range as the 600SX Series and Sully White LED range; and a single lens Fresnel or Pebble luminaire (315L) to complete the full set.

RJ C3 Colour Creative Control – a new approach to lighting control
Integrated into all new Sully 4C models is a new software platform, RJ C3, the Colour Creative Control, which has been specifically designed to offer multiple functions and control in a user-friendly way. Operators can choose from a variety of presets and options to select their required modes of colour control, colour temperature adjustment, colour mixing, colour filter simulation and even calibrated white sources. High quality dimming and adjustable response times are also possible alongside a DimShift function which allows colours to follow the Planck curve on dimming.

Arthur 1014 LT – the long throw 800W LED followspot for stadiums and arenas
Robert Juliat again demonstrated its lead in LED development with the first showing in Germany of Arthur LT, its new long-throw adaptation of the original Arthur followspot. Arthur LT has a narrower beam angle with a zoom range of 4° - 10° (compared to the original Arthur’s 5.5° - 15°) and an output from its 800W LED source that matches an HMI 2500W Aramis at similar angles, and a high CRI (>94).

With the choice of several ventilation modes, Arthur’s sound level is much quieter than any of its discharge rivals; it can be operated as easily in opera houses as on concerts. Arthur LT is also available with top controls for the iris and dimmer functions.

“It was wonderful to be back at Prolight + Sound and have the opportunity to show our new products to our international customers in person,” says Robert Juliat MD, François Juliat. “The response to our new Sully 4C has exceeded even our expectations. With LED sources now such a major player in the market, the need to upgrade to LED profiles across venues worldwide is increasingly urgent and Sully 4C is answering the needs in quality and performance of both old and new customers.” 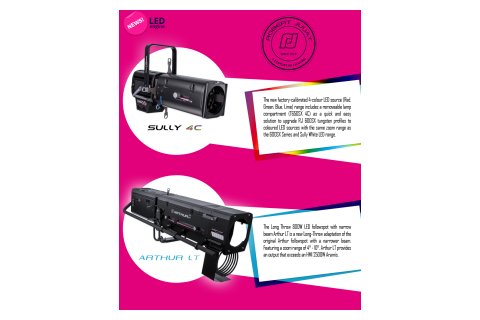