As part of the "Monument Lighting" project initiated by the "Jerusalem Development Authority" and the "Jerusalem Ministry of Heritage", Danor was invited to design the lighting for the church building and the bell tower of the Augusta Victoria Church, which was inaugurated in 1910.

The sloping roofs of the church were built at several heights. Accents in the intensities of light design were created for enhancing the perspective in the dark. The tower received an emphasis of light from its base upwards.

Recessed lighting fixtures from the Studio Due Monochromatic Terra WL5 inground type, for illuminating the stone and curved walls, and Studio Due WL60 Ultra-Narrow, for a complete illumination of the tower walls, have been used. 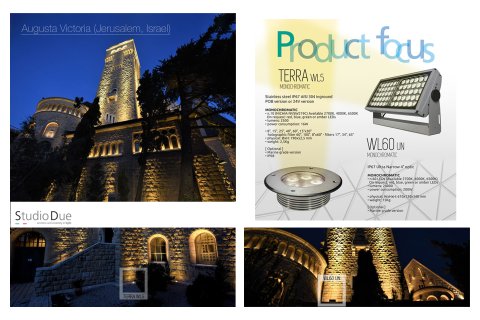