STORMY innovates tradition since it uses the latest LED technology, but retains all the charm of a classic strobe. The light source is a strip of powerful white LEDs with a 5,700 K color temperature; thanks to their linear arrangement, they perfectly emulate a bright Xenon linear lamp. The flash effect is actually enhanced since the Stormy is equipped with a parabolic reflector, like a classic strobe, and does not project the light directly forwards like other LED strobes do. The reflector collects the main beam over an aperture of 42°, leaving 130° for spatial diffusion. Its total brightness is a remarkable 80,000 lumens.

Using LED technology has another important benefit: the flash effect management is enormously flexible. The frequency, duration and intensity of the pulse are fully digitally controlled, and these parameters are even independently adjustable, which is impossible with a xenon lamp strobe. When it “pulsates”, the Stormy delivers 980 watts. Thanks to its highly sophisticated electronics, the light turns on and off instantly, creating the jerky movement illusion, which is the essential hallmark of a true strobe. The time the light is on (the pulse duration) may be extended as required. In this case, the Stormy delivers 720 watts with automatic adjustment.

Thanks to the use of LEDs, the light intensity remains absolutely constant, without flickering effect found with conventional strobes.

Besides the white LED version, the Stormy also comes with RGBW LEDs, which are able to flash in any color. At last, there is no more need for gels, which dramatically reduce the amount of light, or slow noisy unreliable scrollers. The way the strobe pulse is controlled is the same as was described for the white LED version. The RGBW Stormy has a total brightness of 40,000 lumens.

With the Stormy, the age of dinosaurs is over. The striking effect of a true classic strobe in a modern technology package is finally. The fragile lamps that last only 500 hours have been replaced by sturdy LEDs, which last over 50,000 hours. The light pulse may be adjusted freely with absolute precision. You can get flashes of colored light. A modern digital display means the parameters and DMX address may be set up in an immediate, user-friendly way. 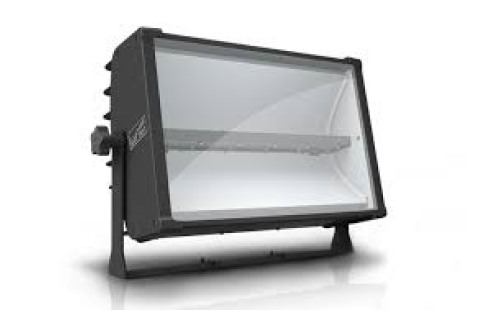